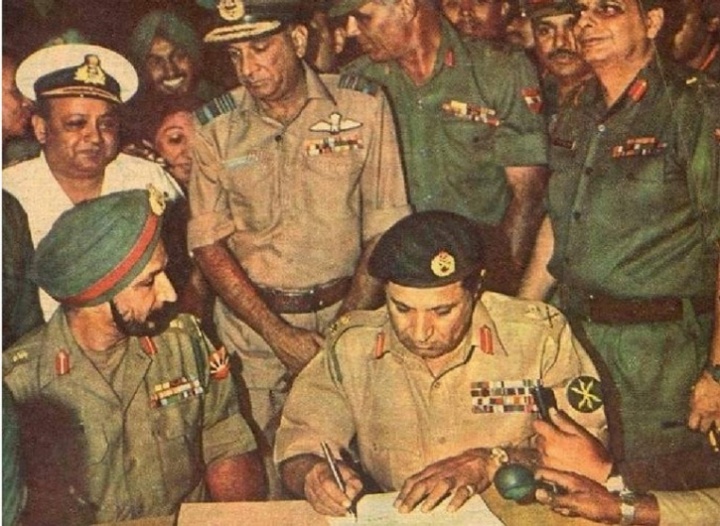 India and Pakistan have had a long-standing history of conflict owing to hostility originating from historical and political factors. The British left the Indian Subcontinent divided into secular India and a largely Muslim populated Pakistan but what followed was one of the most disturbing migrations in history outlined by violence and riots. The relations between the newly formed countries have since been marred by religious animosity, suspicion, water and territorial disputes. The disputes have escalated into three wars till date in the years 1965, 1971 and 1999. However, the Indo Pakistan War of 1971 which led to the liberation and formation of the new nation Bangladesh will be etched in the aeons of history for India’s role, multi-pronged defence strategy and diplomatic victory.

A combination of several long and short term causes led to the Indo-Pakistan War of 1971. Post the formation of East and West Pakistan, there was an imbalance in the economic and political activities which is considered to be the long-standing reason for turmoil and political upheaval. West Pakistan comprised the provinces of Punjab, Sindh, Balochistan, and the North-Western Frontier, while East Pakistan was the fifth province of Pakistan. East Pakistan was the largest of these five provinces in population size, yet had the least political power. Despite the massive contribution of the East to the economy of Pakistan, amounting to 70% of the country’s exports, it only received 25% of the country’s import income.

Another cause of the brewing tensions between East and West Pakistan was the conflict over the “official language of Pakistan”. In the year 1948, the Pakistani Prime Minister, Mohammed Ali Jinnah declared the need for Urdu to be adopted as Pakistan’s official language. This caused an uproar among the people because Urdu was spoken only by the Mujahir and the Sindhi’s. On the other hand, owing to their Bengali origins, the East Pakistani’s only predominantly spoke Bangla.

The growing tensions and the conflict between different ethnicities at the time led to the formation of the Pakistani Political Party known as the Awami Muslim League in the year 1948. Sheikh Mujibur Rahman, the leader of Awami League, was at the forefront, leading the liberation war. The conflict over the official language soon spiralled into protests by the students of East Pakistan and violence leading to the death of seven students on February 21st, 1952. Over the next two decades, the rebellion in East Pakistan escalated. In the year 1962, under the government of Yahya Khan, for the first time, the Martial law was adopted and the constitution was abrogated which led to the further economic disparity between East and West Pakistan. It was also seen as an attempt to suppress the student rebellion in East Pakistan at the time.

While there were several long term causes that over time led to the build-up of tensions in Pakistan, a quick turn of events close to the year 1971 were the immediate causes of the war.

In March 1971, Sheikh Mujibur Rahman for the first time won the national elections and declared the need for an autonomous East Pakistan. Contradicting the Pakistani People’s Party and Yahya Khan’s government, his party was one that supported the idea of a 6 point program granting all power to the state legislature apart from the nation’s defence and foreign affairs. This victory, for the first time, also allowed the Sheikh to formally form a government. However, the leader of the opposing Pakistan People’s Party, Zulfikar Ali Bhutto, did not allow the Sheikh to become the Prime Minister despite an obvious majority.

What followed was an unprecedented rebellion against the Pakistani army. The Pakistani army resorted to a barrage of horrific crimes and ethnic cleansing as a response. Mass migrations into Indian territory followed because of the horrific atrocities taking place in Pakistan by the army consisting of rapes, murders, shootings, etc. This mass human rights violation was known as the “Operation Searchlight”.

There was an influx of people coming in from East Pakistan to India seeking refuge under the administration of the then Prime Minister of India, Indira Gandhi. This placed an increasing strain on India, a nation still recovering from the damage wrought by the partition of India and economic instability. Indira Gandhi sought the help of other nations to aid East Pakistan, but to no avail. At this time, she wanted to aid in liberating East Pakistan but could not do so without provocation.

The ethnic cleansing conducted by the Pakistani Army, the attack on Dhaka University and most importantly the “preemptive strikes” conducted on the third of December on the “western front” by Pakistan officially made India party to the war, and diplomatic conflict was brewing between India and Pakistan. On December 3rd 1971, when Pakistan launched attacks on 11 Indian Air Bases under their Prime Minister Yahya Khan, India was given the opportunity to retaliate and come to the aid of East Pakistan. Over the next thirteen days, the Indian army fought in unison with the Air Force and the navy against Pakistan leading to a victory and Liberation of East Pakistan. Finally, on the 16th of December, the Pakistani Army chief signed the Dakha “Instrument of Surrender”, formally marking the end of the war and the birth of the new nation of Bangladesh.

India and Pakistan’s relations have been adversarial from the days of the partition in 1947. Unresolved disputes on territories, water sharing, terrorism and suspicion over political motive have widened the conflicts between the two nations. The nations fought yet another war, the Kargil War, in 1999 over Pakistani military incursions into Indian territory. The two nations have seen several phases of diplomatic efforts over the years to maintain peace and stability in the region, very often mediated by progressive leadership, allying countries and the UN. Despite seven decades of the formation of the two nations they continue to bear the burden of the flaws of their origin.